Tonight, the 17th World Soundtrack Awards have been awarded in Ghent. Jóhann Jóhannsson and Rupert Gregson-Williams won Best Film Composer of the Year and Best Television Composer of the Year respectively, while David Shire received the Lifetime Achievement Award for his entire career. Guest of honour during the concert that follows the awards ceremony, is jazz composer Terence Blanchard. 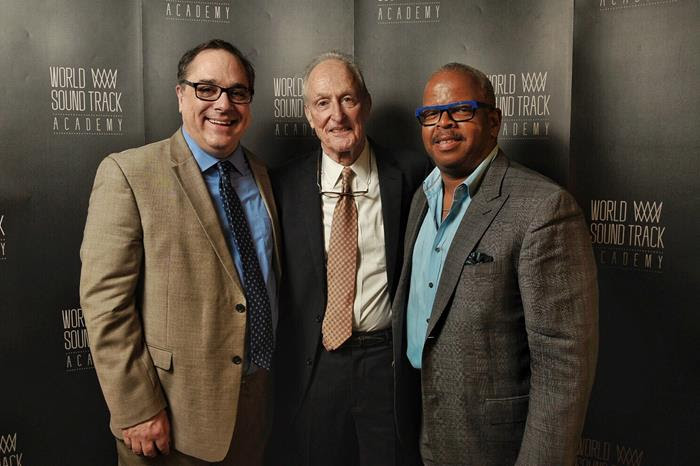 Icelandic composer Jóhann Jóhannsson, who previously scored such films as ‘Sicario’ and ‘The Theory of Everything’, was awarded Best Film Composer of the Year for Dennis Villeneuve’s feature ‘Arrival’. Best Television Composer of the Year went to Rupert Gregson-Williams (‘Veep’, ‘Wonder Woman’) for scoring the Netflix-original drama series ‘The Crown’.

The track “City of Stars” from ‘La La Land’, written by ‘Whiplash’-composer Justin Hurwitz, was awarded Best Original Song Written Directly for a Film, while Nicholas Britell was voted this year’s Discovery of the Year for his Oscar-nominated score for ‘Moonlight’. The budding composer’s portfolio also includes music for ‘The Big Short’, Natalie Portman’s directorial debut ‘A Tale of Love and Darkness’ and ‘Battle of the Sexes’ among others.

During the ceremony, David Shire was also granted the Lifetime Achievement Award, acknowledging his considerable and varied contribution to film music. During his impressive career, Shire worked with such great American directors as Francis Ford Coppola (‘The Conversation’), Alan J. Pakula (‘All the President’s Men’), George A. Romero (‘Monkey Shines’), David Fincher (‘Zodiac’) and Martin Ritt for whom he wrote the Oscar-winning score of ‘Norma Rae’. Although his film scores are often jazz influenced, Shire often showed proof of his versatility by creating music for films like ‘Saturday Night Fever’ and ‘Raid on Entebbe’.

The Awards Gala is followed by a concert performed by Brussels Philharmonic, conducted by Dirk Brossé and accompanied by film fragments on screen. Central guest of the evening is jazz composer Terence Blanchard, known for his long-running collaboration with director Spike Lee for whom he scored such films as ‘Malcolm X’, ‘Clockers’ and ‘Inside Man’. During the concert, Blanchard will also be performing work from the HBO documentary ‘When The Levees Broke: A Requiem in Four Acts’ and ‘Red Tails’. In addition, last year’s Discovery of the Year winner Joe Kraemer (‘Jack Reacher’, ‘Mission: Impossible – Rogue Nation’) and David Shire will take the stage.

Held on 19 October, the Symphonic Jazz in Film Concert sees the best symphonic jazz soundtracks of the past century accompanied by film clips on the big screen, performed by Brussels Philharmonic and Brussels Jazz Orchestra. Together, they’ll perform catchy scores from ‘The Pink Panther’ over ‘Bullitt’ to ‘Who Framed Roger Rabbit?’.