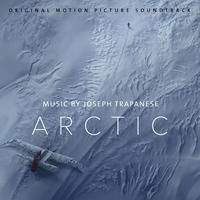 “Director Joe Penna was a wonderful creative partner in helping me invent a unique soundtrack for ARCTIC.  We used choirs of bass flutes, Wagner tubas, and low strings to evoke the power of the landscape, and explored electronic techniques like convolution, re-amplification, and tape varispeed to bring organic, familiar sounds into the frozen environment of the film.  We’re incredibly proud of this distinct film and soundtrack, and excited to share it with you” says Joseph Trapanese.

Directed by Joe Penna and written by Penna and Ryan Morrison, Arctic is the story of a man stranded in the wake of an airplane crash who must decide whether to remain in the relative safety of his makeshift camp or to embark on a deadly trek through the unknown in hopes of making it out alive.  Penna’s feature-film debut stars Mads Mikkelsen and is produced by Christopher Lemole and Tim Zajaros of Armory Films, who also financed, and Noah C Haeussner of Union Entertainment Group. Martha De Laurentiis, Manu Gargi and Einar Thorsteinsson serve as executive producers.

ABOUT JOSEPH TRAPANESE
Joseph Trapanese is best known for his sleek, ominous score work for blockbuster films like Tron: Legacy, Straight Outta Compton, Oblivion, and the Raid series. Other notable scores include the hugely-successful musical film The Greatest Showman (2017), the second and third installments of Lionsgate’s Divergent series, Insurgent (2015) and Allegiant (2016); Earth to Echo (2014); and Ubisoft’s video game The Crew (2014). As a composer, arranger, and producer for movie, television, theater, and video game music, he has collaborated with a number of mainstream musical acts including Daft Punk, M83 and Moby. In the studio and in concert, he has also worked with Dr. Dre, Zedd, Kelly Clarkson, Kendrick Lamar, Haim, The Glitch Mob, Active Child, Halsey, Sohn, John Newman, Dia Frampton, 3OH!3, Steven Price, and James Newton Howard.