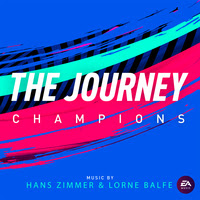 (September 27, 2018 – Los Angeles, CA) – Lakeshore Records has announced a new title in its partnership with Electronic Arts with the release of FIFA 19: THE JOURNEY: CHAMPIONS – Official Video Game Soundtrack. The release will feature composing legend Hans Zimmer (Oscar® and Golden Globe for Best Original Score) and composer Lorne Balfe’s (4 ASCAP Film and Television Awards for Top Box Office Films) soundtrack to The Journey: Champions, the story driven mode within FIFA 19 for the PlayStation 4, Xbox One and PC*, available worldwide September 28, 2018.

The Journey, which debuted in FIFA 17, was the first of its kind. Powered by both user choice and actual match gameplay, the story driven mode focused on a single character’s career. Thanks to powerfully-rendered cinematics of the Frostbite™ engine on the PlayStation 4, Xbox One and PC versions of the game, players follow Alex Hunter as he rises to the pinnacle of world football after taking the Premier League by storm. Continued in FIFA 18 with The Journey: Hunter Returns, players return to win the MLS Cup with the LA Galaxy before heading to Europe to lead Hunter’s club to a domestic league and cup double. Reaching its dramatic conclusion in FIFA 19 with The Journey: Champions, Hunter now joins Real Madrid in the dramatic finale to chase UEFA Champions League glory with his favored number 29 shirt.

“Lakeshore Records is incredibly excited to be working with EA to release some of the absolute very best soundtracks by some of the very best composers working in visual media today,” said President of Lakeshore Records, Brian McNelis. “It is an honor to be invited to work with such talented people on such great projects and we hope working with EA will continue to elevate the awareness and status of game music while providing the best possible services to the community.”

In addition to releasing new soundtracks for upcoming EA titles, Lakeshore Records will also be releasing soundtracks from the vast EA catalog, including first ever soundtrack releases and reissues of out-of-print recordings.  In the next few weeks, Lakeshore will be announcing releases of catalog titles including the soundtracks for top-selling EA franchises that include Dragon Age™, Battlefield™, Mass Effect™, Need For Speed™, Command & Conquer™, Titanfall™, Medal Of Honor™, and The Sims™.

“Lakeshore has proven themselves to be at the next level of marketing and streaming for the very best film and television music being created today,” says Electronic Arts Worldwide Executive of Music Steve Schnur. “And because they appreciate and understand the medium and its fans like no other label, we’re proud to be their first-ever video game partners. EA’s composers, among the top talents in movies, television and games, are equally excited about the skill and fervor Lakeshore brings to the table.”

ABOUT HANS ZIMMER
German-born composer Hans Zimmer is recognized as one of Hollywood’s most innovative musical talents‚ having first enjoyed success in the world of pop music as a member of The Buggles. The group’s single Video Killed the Radio Star became a worldwide hit and helped usher in a new era of global entertainment as the first music video to be aired on MTV.

Zimmer entered the world of film music in London during a long collaboration with famed composer and mentor Stanley Myers‚ which included the film MY BEAUTIFUL LAUNDRETTE. He soon began work on several successful solo projects‚ including the critically acclaimed A World Apart‚ and during these years Zimmer pioneered the use of combining old and new musical technologies. Today‚ this work has earned him the reputation of being the father of integrating the electronic musical world with traditional orchestral arrangements.

A turning point in Zimmer’s career came in 1988 when he was asked to score RAIN MAN for director Barry Levinson. The film went on to win the Oscar for Best Picture of the Year and earned Zimmer his first Academy Award Nomination for Best Original Score. The next year‚ Zimmer composed the score for another Best Picture Oscar recipient‚ DRIVING MISS DAISY‚ starring Jessica Tandy and Morgan Freeman.

Having already scored two Best Picture winners‚ in the early ’90s Zimmer cemented his position as a pre-eminent talent with the award-winning score for THE LION KING. The soundtrack has sold over 15 million copies to date and earned him an Academy Award for Best Original Score‚ a Golden Globe‚ an American Music Award‚ a Tony and two Grammy Awards. In total‚ Zimmer’s work has been nominated for 7 Golden Globes‚ 7 Grammys and seven Oscars for RAINMAN‚ GLADIATOR‚ THE LION KING‚ AS GOOD AS IT GETS‚ THE PREACHERS WIFE‚ THE THIN RED LINE‚ THE PRINCE OF EGYPT and THE LAST SAMURAI.

With his career in full swing‚ Zimmer was anxious to replicate the mentoring experience he had benefited from under Stanley Myers’ guidance. With state-of-the-art technology and a supportive creative environment‚ Zimmer was able to offer film-scoring opportunities to young composers at his Santa Monica-based musical ’think tank.’ This approach helped launch the careers of such notable composers as Mark Mancina‚ John Powell‚ Harry Gregson-Williams‚ Nick Glennie-Smith and Klaus Badelt.

In 2000 Zimmer scored the music for GLADIATOR‚ for which he received an Oscar nomination‚ in addition to Golden Globe and Broadcast Film Critics Awards for his epic score. It sold more than three million copies worldwide and spawned a second album “Gladiator: More Music From The Motion Picture‚” released on the Universal Classics/Decca label. Zimmer’s other scores that year included MISSION: IMPOSSIBLE 2‚ THE ROAD TO EL DORADO and AN EVERLASTING PIECE‚ directed by Barry Levinson.

Some of his other impressive scores include PEARL HARBOR‚ THE RING‚4 films directed by Ridley Scott; MATCHSTICK MEN‚ HANNIBAL‚ BLACK HAWK DOWN and THELMA & LOUISE‚ Penny Marshall’s RIDING IN CARS WITH BOYS AND A LEAGUE OF THEIR OWN‚ Quentin Tarantino’s TRUE ROMANCE‚ TEARS OF THE SUN‚ Ron Howard’s BACKDRAFT‚ DAYS OF THUNDER‚ Smilla’s SENSE OF SNOW and the animated SPIRIT: STALLION OF THE CIMARRON for which he also co-wrote four of the songs with Bryan Adams‚ including the Golden Globe nominated “Here I Am.”

At the 27th annual Flanders International Film Festival‚ Zimmer performed live for the first time in concert with a 100-piece orchestra and a 100-piece choir. Choosing selections from his impressive body of work‚ Zimmer performed newly orchestrated concert versions of GLADIATOR‚ MISSION: IMPOSSIBLE 2‚ RAIN MAN‚ THE LION KING‚ and THE THIN RED LINE. The concert was recorded by Decca and released as a concert album entitled “The Wings Of A Film: The Music Of Hans Zimmer.”

In 2003‚ Zimmer completed his 100th film score for the film THE LAST SAMURAI‚ starring Tom Cruise‚ for which he received both a Golden Globe and a Broadcast Film Critics nomination. Over the past year‚ Zimmer has scored Nancy Meyers’ comedy SOMETHING’S GOTTA GIVE‚ the animated Dreamworks film‚ A SHARK’S TALE (featuring voices of Will Smith‚ Renee Zellweger‚ Robert De Niro‚ Jack Black and Martin Scorsese)‚ and most recently‚ Jim Brooks’ SPANGLISH starring Adam Sandler and Tea Leoni (for which he also received a Golden Globe nomination). His projects also include Paramount’s WEATHERMAN starring Nicolas Cage‚ Dreamworks’ MADAGASCAR and Warner Bros.’ BATMAN BEGINS.

Zimmer’s additional honors and awards include the prestigious Lifetime Achievement Award in Film Composition from the National Board of Review‚ and the Frederick Loewe Award in 2003 at the Palm Springs International Film Festival. He has also received ASCAP’s Henry Mancini Award for Lifetime Achievement.