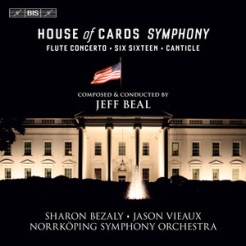 [Hollywood, CA – August 24, 2018] – BIS Records is releasing today the House of Cards Symphony and other works by composer Jeff Beal in both digital and SACD formats. The composer also conducted all of the performances by Sweden’s Norrköping Symphony Orchestra and renowned soloists Sharon Bezaly, flute and Jason Vieaux, guitar.

Composer Jeff Beal always wanted to address the larger scope and possibilities of classical composition in connection with film. From the start of his work creating the music for this internationally acclaimed Netflix series (soon to present its sixth and final season), there were not just characters, sets and action: the composer also saw themes, movements and ideas that rival the inspiration of great symphonies. The House of Cards Symphony is a culmination of this journey to express a timeless story through the power and majesty of the orchestra.

Beal explained the creation of the symphony. “This is concert music first and foremost for me – a bit of a coming-out party as a classical composer, but it’s part of what I would call a new eclectic approach to the concert hall. By combining these two disparate threads of my work (soundtrack writing and the symphonic world), I think the recording shows my voice in a new way.”

The Norrköping Symphony Orchestra has received international acclaim for its recordings of the music of the 20th century modernist composer Allan Pettersson, but here, under the direction of the composer himself, it has taken to the new idiom and welcomed the additional instruments necessary to bring out that House of Cards feeling.