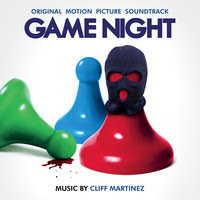 “This score may have been the biggest musical challenge of my career,” said Martinez. “When it comes to comedy, I doubt I’m at the top of most directors’ short list. I’m the guy you call when the film’s characters are doing drugs, getting shot, stabbed, beaten or blown up –unless of course, those things are supposed to be funny.”

In this case, they certainly are. GAME NIGHT is a comedy that takes a fresh and unexpected approach, so Martinez was an inspired choice – with a composing career boasting films that are often dark, psychological stories, and longstanding relationships with Steven Soderbergh and Nicolas Winding Refn on films and TV series such as The Knick, Drive, The Neon Demon, and Solaris.

Directed by John Francis Daley and Jonathan Goldstein, the action comedy GAME NIGHT, in theaters nationwide on February 23, stars Jason Bateman and Rachel McAdams as Max and Annie, whose weekly couples game night gets kicked up a notch when Max’s charismatic brother, Brooks, arranges a murder mystery party, complete with fake thugs and faux federal agents. So, when Brooks gets kidnapped, it’s all part of the game…right? But as the six uber-competitive gamers set out to solve the case and win, they begin to discover that neither this game—nor Brooks—are what they seem to be. Over the course of one chaotic night, the friends find themselves increasingly in over their heads as each twist leads to another unexpected turn. With no rules, no points, and no idea who all the players are, this could turn out to be the most fun they’ve ever had…or, it’s game over.

“The first thing that the directors said to me was, ‘Don’t try to be funny. That’s our job. Just be yourself,’” Martinez joked.

Perhaps it is because of his time in the punk scene as a drummer for bands including the Weirdos, Captain Beefheart and the Magic Band, the Red Hot Chili Peppers and The Dickies that Cliff Martinez’s approach to scoring is nontraditional.  His scores tend towards the stark and sparse, utilizing a modern tonal palette to paint the backdrop for films that are often dark, psychological stories like Pump Up the Volume (1990), The Limey (2009) Wonderland (2003), Wicker Park (2004), and Drive (2011). Martinez was nominated for a Grammy Award for Steven Soderbergh’s Traffic, a Cesar Award for Xavier Giannoli’s A L’origine, and a Broadcast Film Critics Award for Drive).  His score for The Neon Demon was awarded Best Soundtrack at the 2016 Cannes International Film Festival.

Still the drummer at heart, Martinez’s use of audio manipulations, particularly for percussive sounds, has been evolving through the years and is evident by the hammered dulcimer of Kafka (1991), the gray-areas between sound design and score for Traffic (2000), the steel drums and textures of Solaris (2002), what Martinez called “rhythmi-tizing pitched, ambient textures” of Narc (2002), and “using percussion performances to trigger and shape the rhythmic and tonal characteristics of those ambient textures,” as he described his score for 2011’s The Lincoln Lawyer.  Martinez’s longstanding relationship with director Steven Soderbergh began with 1989’s Sex, Lies, and Videotape and has produced ten theatrical film releases, including Kafka, The Limey, Traffic, Solaris, and Contagion, and the critically acclaimed TV series The Knick.

Martinez’s films also include Nicolas Winding Refn’s The Neon Demon and Only God Forgives, Robert Redford’s The Company You Keep, Harmony Korine’s Spring Breakers (co-composed with Skrillex), and Martin Campbell’s The Foreigner.  His upcoming projects include Too Old To Die Young – Refn’s new series for Amazon. Cliff Martinez was inducted into the Rock & Roll Hall of Fame in April 2012 with the Red Hot Chili Peppers. He earned the prestigious Richard Kirk Lifetime Achievement award from BMI in 2013.