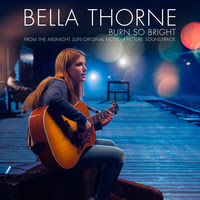 January 18, 2018, Los Angeles, CA:  Lakeshore Records will release Midnight Sun – Original Motion Picture Soundtrack digitally and on CD March 23rd with a vinyl version forthcoming.  The soundtrack features original songs performed by the film’s star Bella Thorne as well as original score by Bright Eye’s Nathaniel Walcott (The Fault In Our Stars).  Other artists appearing on the soundtrack are White Sea, Waters, Mia Wray and Adriel.  The film was written by Eric Kirsten and directed by Scott Speer (Step Up Revolution) and stars Thorne, Patrick Schwarzenegger, Rob Riggle and Quinn Shephard.  The film will be released in theaters on March 23rd by Global Road Entertainment.

Midnight Sun is a romantic tearjerker about 17-year-old Katie Price (Bella Thorne), sheltered at home since childhood with a rare genetic condition, a life-threatening sensitivity to sunlight.  Having only her father Jack (Rob Riggle) for company, Katie’s world opens up after dark when she ventures outside to play her guitar.  One night, her dreams come true when she’s noticed and asked out by her longtime crush Charlie (Patrick Schwarzenegger), whom she’s secretly watched from her bedroom window for years.  As they embark on nightly summer excursions, Katie’s risk to sunlight grows and she’s presented with the gut-wrenching dilemma of whether she can live a normal life with her newfound soul mate.

ABOUT BELLA THORNE
Thorne (Katie Price) has cemented herself as one of the most in demand young actresses in Hollywood. She was seen in the MTV series Scream, recreating the iconic Drew Barrymore scene from the original thriller, as well as CBS Films’ hit comedy The DUFF, in which she won Choice Villain at the 2015 Teen Choice Awards. Embarking from her early roots on the hit Disney Channel series Shake It Up, she continued to charm movie goers with Alvin and the Chipmunks: The Road Chip during the 2015 holiday season. She made her film festival debut at SXSW 2016 with Awesomeness Films’ Shovel Buddies and her animated film, Focus Features’ Ratchet and Clank (Sylvester Stallone, John Goodman, Rosario Dawson).

In 2014, Thorne kept close ties with her Disney family and appeared in Walt Disney Studios Motion Pictures film Alexander and the Terrible, Horrible, No Good, Very Bad Day, starred opposite Adam Sandler and Drew Barrymore in Warner Bros. Blended and in Tyler Perry’s Boo! A Madea Halloween.
Currently, Thorne is starring in the new Freeform Series Famous in Love based on the novel of the same name from the creator of Pretty Little Liars, Marlene King. She produced and starred in Awesomeness Films’ You Get Me, which is now streaming on Netflix. Thorne can also currently be seen in Warner Bros. The Babysitter (2017).

Recently, Thorne wrapped production on The Death and Life of John F. Donovan in which she appears opposite Jessica Chastain and Kit Harington and Break My Heart 1000 Times, which she filmed in Winnipeg.

Thorne has been a part of numerous national campaigns including being the face of the Candies brand as well as being the spokesperson for Neutrogena, following in the footsteps of Kerry Washington, Julie Bowen, and Jennifer Garner.

Thorne frequently lends her voice to causes near and dear to her heart including the Boys and Girls Club SMART Girls initiative, The Thirst Project as well as the Dyslexia Foundation. Her social following continues to grow, and she has over 20 million followers across all of her social media platforms. Thorne also penned a three-part series entitled AUTUMN FALLS, with the third installment, AUTUMN’S WISH, released last summer.

ABOUT SCOTT SPEER
Speer (Director, Executive Producer) began his career as a director of music videos, commercials, and television projects before making the transition to feature films.

Born in Monterey, California, and raised in San Diego, Speer graduated USC with a bachelor’s degree in Cinema-Television. Soon afterward he created acclaimed videos for artists such as will.i.am, Jordin Sparks, and Jason Derulo among many others. Speer was honored with a 2006 MVPA Award for Directorial Debut of the Year for the video Stars by Switchfoot, and in 2007 won his first MTV Video Music Award for his work on Bella Traicion by the Mexican pop sensation Belinda. Commercials followed, with national campaigns for Colgate, Sara Lee, and Buick. Additionally, Scott was honored by the Gospel Music Association with two Dove awards for Stars and tobyMac’s Boomin’.

Speer made his feature film directorial debut with 2012’s Step Up Revolution, and in 2014, was an executive producer on Step Up: All In. He is currently in post-production on his third feature, Status Update, which follows Kyle (Ross Lynch), a teenager who, after being uprooted by his parents’ separation and unable to fit into his new hometown, stumbles upon a magical app that causes his social media updates to come true.

After Status Update, Speer will reunite with Midnight Sun star Bella Thorne and will direct Break My Heart 1000 Times, a supernatural romantic thriller set nine years after an apocalyptic event that killed millions and left the world inhabited by ghosts.

As a novelist, Scott released the 2012 young adult novel Immortal City, about a world in which celebrity culture revolves around supernatural beings, specifically guardian angels. In April 2013, Speer released his book Natural Born Angel and concluded the trilogy with Battle Angel in 2014.