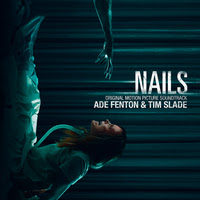 ABOUT NAILS
After surviving a near-fatal accident, track coach and mother Dana awakens in hospital, paralysed and imprisoned in her own body. Whilst struggling to regain control of her life, Dana is confronted with a vindictive spirit; a terrifying presence called Nails, whom she is convinced exists inside her hospital room. Faced with scepticism from her husband, doctors and the staff, and believed to be suffering from a mental breakdown, Dana is left struggling to keep her grip on reality as the targeted attacks grow increasingly violent. To save her marriage and her life, Dana must find a way to convince her family that Nails is real before he succeeds in destroying her and everyone who stands in his way.

ABOUT ADE FENTON and TIM SLADE
Ade Fenton is a record producer and composer, most notably working alongside electronic music icon Gary Numan. He has now produced four critically acclaimed albums for Numan: Jagged, Dead Son Rising, Splinter and Savage, with Artrocker Magazine describing Dead Son Rising, which Ade also co-wrote, as “one of the great dystopian rock albums of all time”. Splinter (Songs From A Broken Mind) was released in October 2013, scoring Numan his first Top 20 album in over 30 years. The album enjoyed widespread global acclaim, with many critics hailing it as the finest album in Numan’s career.

Its success meant Numan and Fenton would soon be back in the studio again working on the follow up Savage (Songs From A Broken World). Released in September 2017, Savage entered the Official UK Album Chart at number 2, delivering Numan his highest chart placing since 1980 and again receiving rave reviews. Alongside his work as a record producer, Ade has produced numerous scores for film, TV and advertising. His recent projects include an original score and soundtrack album, composed alongside Gary Numan, for ‘From Inside’, an epic animated film released by Hollywood’s Lakeshore Entertainment.

Ade has also formed a partnership with multi-instrumentalist Tim Slade, specialising in the creation of original music for Film, Television and Digital Media. In 2016 they completed original scores for the Investigation Discovery/October Films produced thrillers ‘Angel Of Decay’, ‘The Chameleon’ and ’The Head Hunter’. In 2017, the pair have completed an original score for British horror film ‘Nails’, which receives a theatrical release in November 2017 and composed original music for the forthcoming TV series ‘Kiss Of Death’ for Discovery ID/Talos Films/October Films; alongside working on ‘8 Days That Built Rome’ an 8 x 1 hour series for Channel 5.