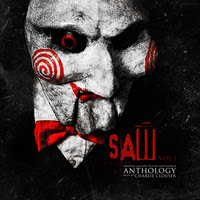 (November 16, 2017 – Los Angeles, CA) – Lakeshore Records will release the SAW ANTHOLOGY V.1 and V.2 digitally on November 24th and on CD/LP later this year. This collection features the beloved original score from all 8 films in the SAW anthology.  Volume 1 contains music from SAW 1 through 4 while volume 2 features music from SAW 5 through 7 and JIGSAW, which will be released in theaters the same day.  All of the original music and arrangements are from composer Charlie Clouser (AMERICAN HORROR STORY, SAW).

“It was quite a task to reduce more than twelve hours of score down into about two hours for the SAW ANTHOLOGY release, and in the end it took me nearly a month!” said Clouser. “I wound up listening to and evaluating every single molecule of music from the whole franchise, which was a task in itself, and in many cases creating montages of three or four cues merged into a single, seamless piece.”

“When I began work on the first SAW film I knew it was really something special, but I’ll admit that at the time I didn’t realize how it could be turned into such a long-running franchise with an ongoing series of installment,” Clouser explained.  “I feel pretty lucky to have been a part of a franchise has struck a chord with a lot of people for a bunch of different reasons.” 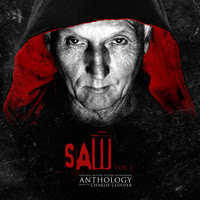 A musician since childhood, Charlie Clouser studied electronic music in college in the early 1980’s, and spent the rest of that decade in NYC making records and programming synths on television scores. In the 1990’s he moved to Los Angeles where he began working with Trent Reznor during the making of The Downward Spiral, NIN’s four-million selling breakthrough album, and joined the band as the keyboard player during the subsequent tour. He remained as the keyboard player with NIN throughout the making of The Fragile in New Orleans and multiple touring cycles, during which he also managed to rack up an impressive list of remix and production credits for dozens of artists such as Marilyn Manson, Rob Zombie, David Bowie, Helmet, Rammstein, and many others. After leaving NIN in 2001, he returned to Los Angeles to resume his film and television career, and has since scored over 250 hours of television dramas across six series on four networks, including the gritty theme for Fox’s AMERICAN HORROR STORY and the haunting score for WAYWARD PINES, as well as fifteen feature films including all eight of the movies in the successful Saw horror franchise. He is married to Zoe Wiseman, a photographer who shoots many of the dark and atmospheric images found in the artwork for his album releases.