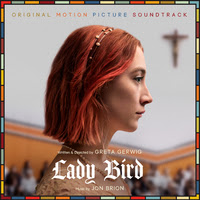 The movie centers around Christine “Lady Bird” McPherson (Saoirse Ronan), who fights against but is exactly like her wildly loving, deeply opinionated and strong-willed mom (Laurie Metcalf), a nurse working tirelessly to keep her family afloat after Lady Bird’s father (Tracy Letts) loses his job.  Set in Sacramento, California in 2002, amidst a rapidly shifting American economic landscape, Lady Bird is an affecting look at the relationships that shape us, the beliefs that define us, and the unmatched beauty of a place called home.

Says Gerwig about working with Brion: “Jon Brion is my all-time favorite musician/composer/producer, and working with him was a dream come true. It is an old-fashioned movie score with melody, which is exactly what I had hoped for. I didn’t want the score to feel like background or ambience, I wanted it to be very present and structured, in the foreground of the storytelling.”

Says Brion: “Greta has an observation: ‘Why do people who want to control everything go into directing?’ Citing that it is one of the most collaborative mediums, an insight I hadn’t heard before let alone so well (and knowingly) articulated, I can confirm for you that in a business of supposed collaborators, she is a real one.”

ABOUT JON BRION
Jon Brion has brought a singular musical voice to Paul Thomas Anderson’s films Hard Eight, Magnolia, and Punch-Drunk Love. He has also scored Michel Gondry’s Eternal Sunshine of the Spotless Mind, Charlie Kaufman’s Synecdoche, New York, and David O. Russell’s I Heart Huckabees. He has written music for the hit comedies The Break-Up and Step Brothers; the gothic animated feature, ParaNorman; Judd Apatow’s This is 40; and Pixar’s Blue Umbrella short. Jon Brion’s music was recently featured in Judd Apatow’s hit comedy Trainwreck, starring Amy Schumer, and Fox Searchlight Pictures’ Wilson, starring Judy Greer, Laura Dern, and Woody Harrelson. Brion showed musical promise from his beginnings in New Jersey, and formed a band out of high school. He played with artists like Aimee Mann and The Wallflowers before becoming a producer—and sometimes songwriter—for Fiona Apple, Rufus Wainwright, and Kanye West (among others). “When I was eight or nine,” recalls a prescient Brion, “I said to myself, ‘It’s really good that I’m going to spend the rest of my life making music, because it will always be above me. There will always be something else to learn.’”